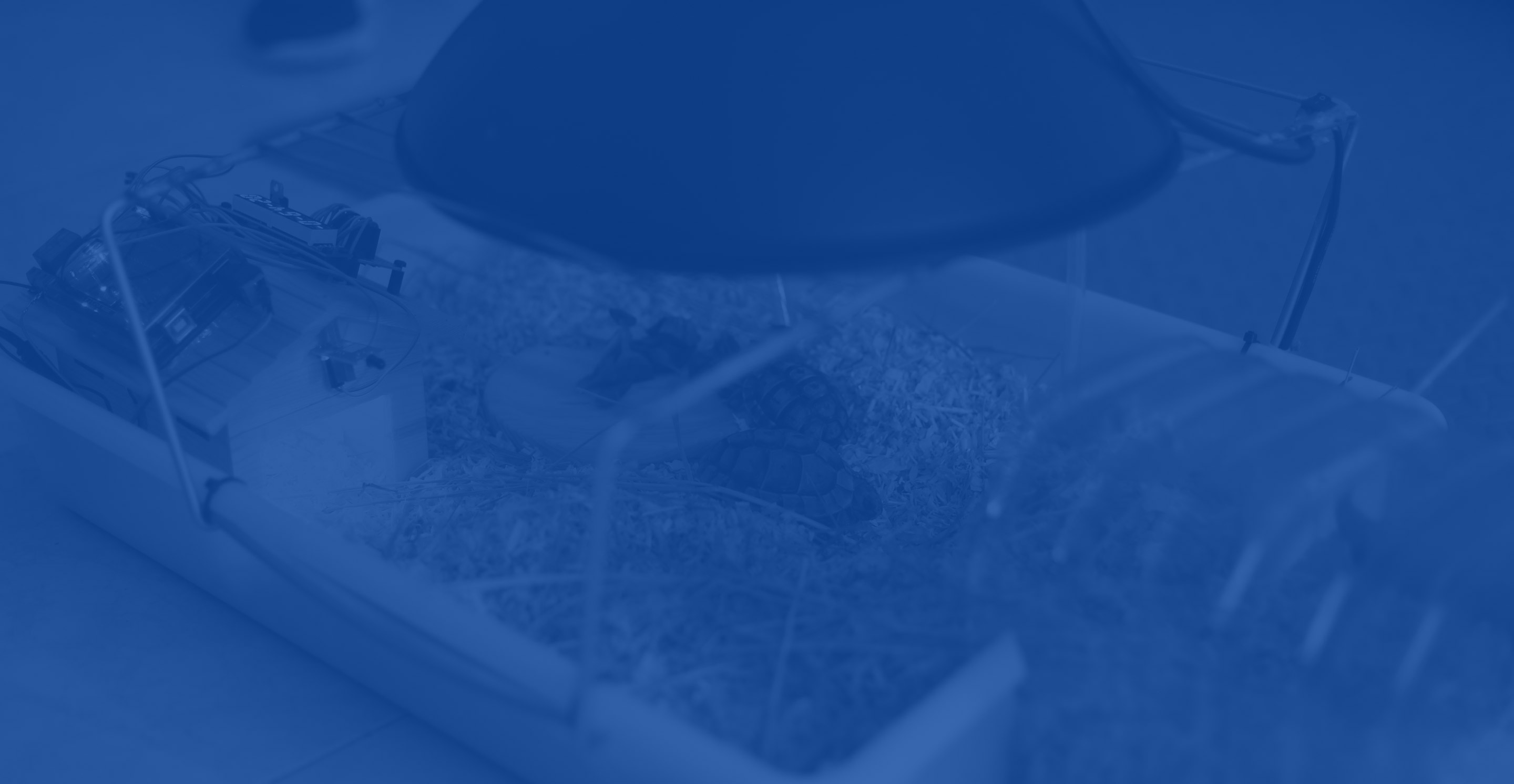 A while back, Pablo Cerda’s family received two turtles as a gift from an aunt. Without having any knowledge of how to care for them, the turtles initially lived in a box filled with dirt. That is, until Pablo noticed that their eyes wept and they seemed unwell.

He realized, as a non-expert in turtle care, it was time to hit the books. As a way of interacting with his two sons, he started building the turtles a more ideal home environment as his knowledge of what they needed grew. But he took it a few steps further than the rest of us might. 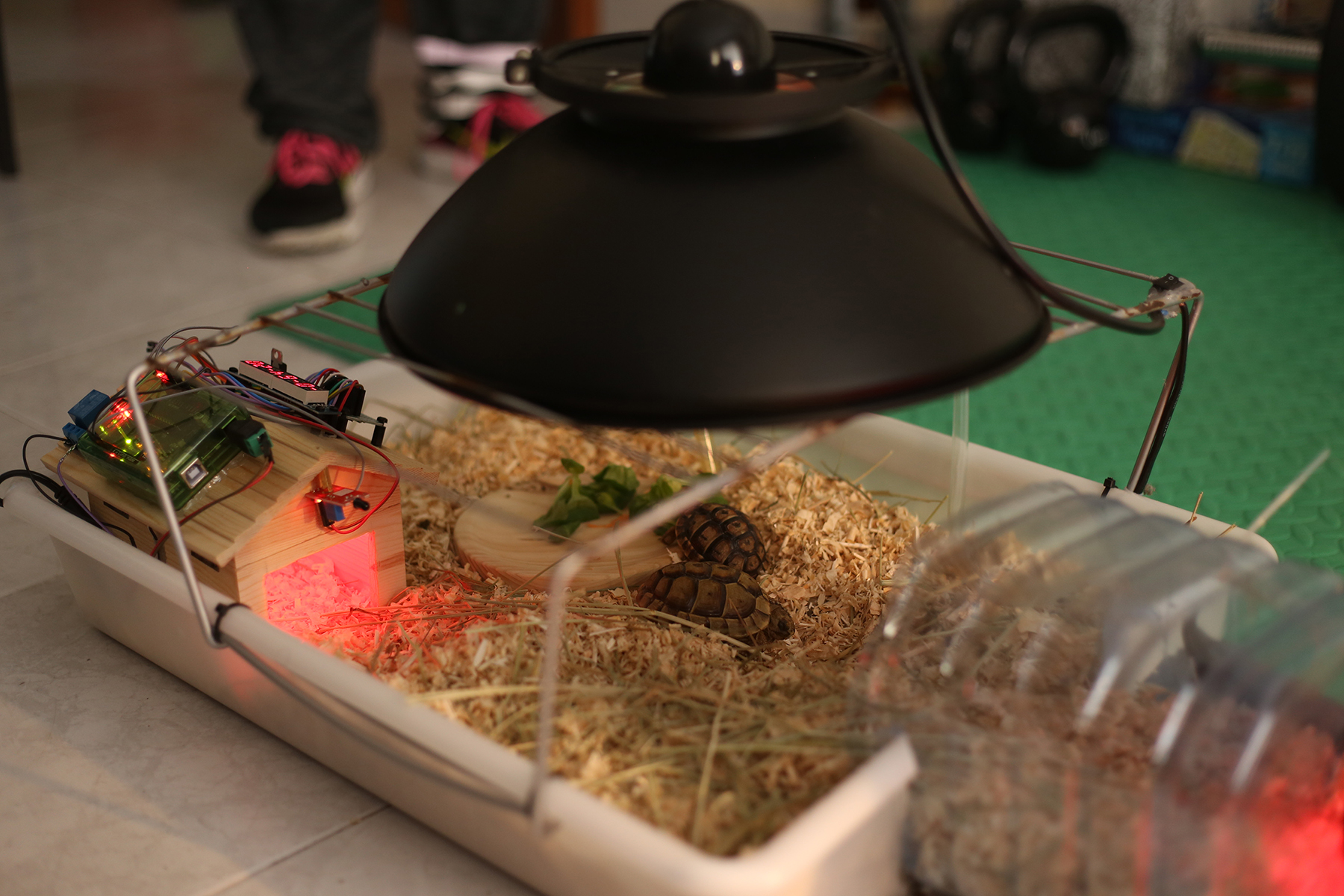 Improve turtle health by automating (and monitoring) their home environment.

To begin, Pablo wanted to stabilize both the temperature and humidity for the turtles. To do this, he purchased a small wooden house and added a small infrared light to the building’s interior to maintain an ideal temperature between 30˚C and 35˚C. He connected the light and a sensor to a microchip and, using C language, wrote the code so the light would turn on/off based on the desired temperature range. 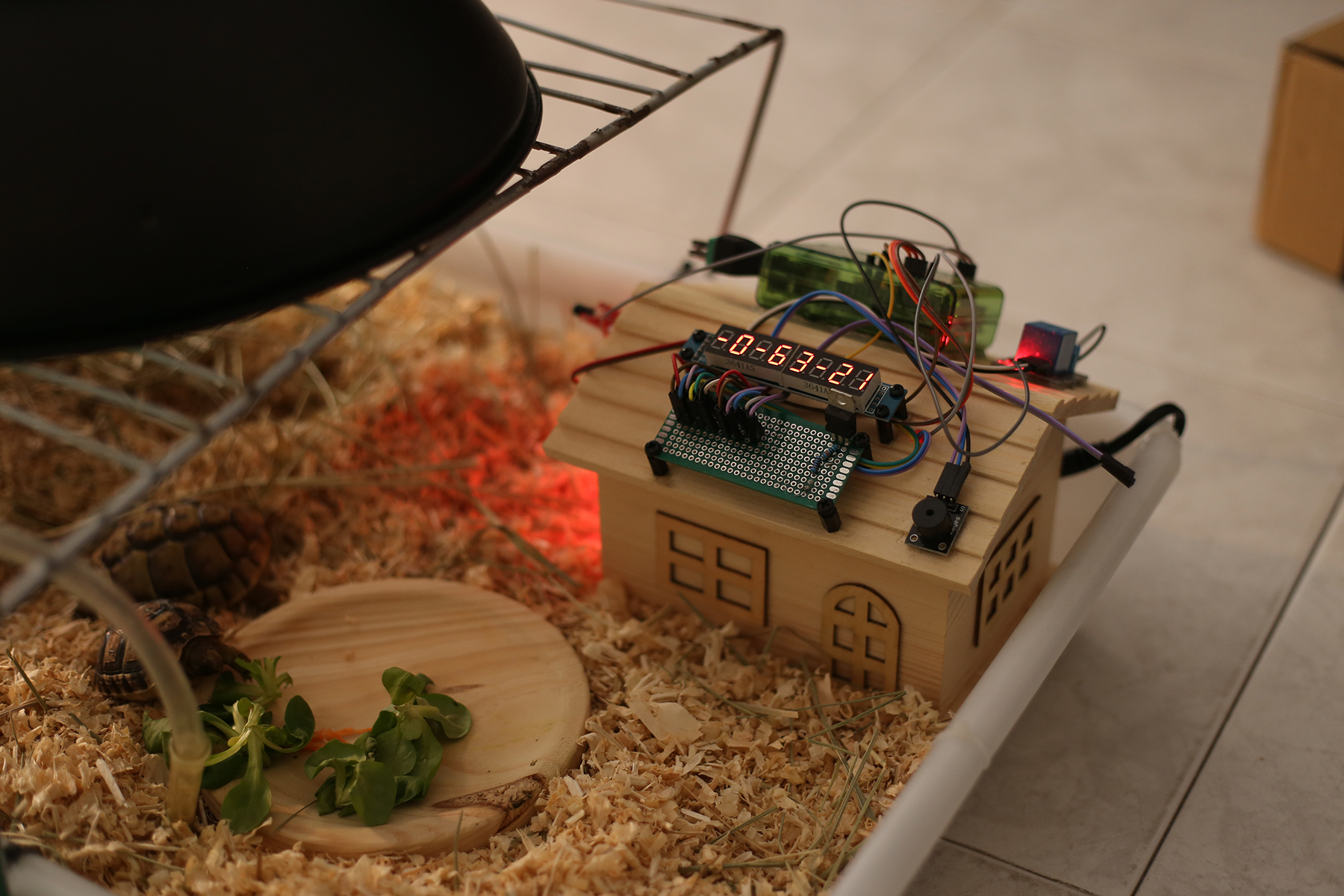 But a hot light in a dry wooden building concerned him. So, along came an automated alarm system. Now, if the sensor detects a fire an alarm is triggered at the back of the turtle’s house. (We are currently working with Pablo to establish a turtle evacuation plan to accompany the alarm system.)

A proper temperature range is not all the turtles needs; humidity is important to them, as well. To maintain a consistent humidity, Pablo connected a small pump that acts as a humidifier and is connected to the same microchip that measures the temperature.

The humidifier is especially important in the winter, when the Spanish climate where Pablo lives is dryer than other seasons.

"My favorite part of this project was studying the turtles and using my technical knowledge to automate their care," Pablo says.

"My favorite part of this project was studying the turtles and using my technical knowledge to automate their care," Pablo says. "Basically, having a pet requires time. But there are some animals that require stricter living conditions than others. If you don't maintain those conditions, those animals will get sick or die. By automating the house, I was able to keep the turtles healthy and happy. And I was able to reduce the manual interactions needed to maintain their environment."

“The turtles have perfect weather conditions now and are doing well,” he adds.

Currently a microchip on the roof of the house, monitors temperature and humidity. Pablo’s next step is to switch out the microchip to one that is both Bluetooth and WiFi enabled so that he can upload the monitoring data to the cloud. From there, he’d like to build a mobile app to make monitoring easier.

Pablo is also looking for more patterns and opportunities to automate things in his apartment. "I've become excited about one day programming a robot that can do more complicated things," he says.

An automated plant watering system is next on the list, though.

Pablo taught himself to program websites as a teenager, started —and successfully handed off —two small companies before his twenty-first birthday, and designed a Content Management System (CMS) from the ground up. Pablo lives with his wife, two sons, and pet turtles in Spain. As a way of interacting with his sons, he started working with them to build a homemade turtle terrarium.

Bluespark Labs is where Bluespark ideas are formed, molded, tested, sometimes thrown out, and purposely built upon.